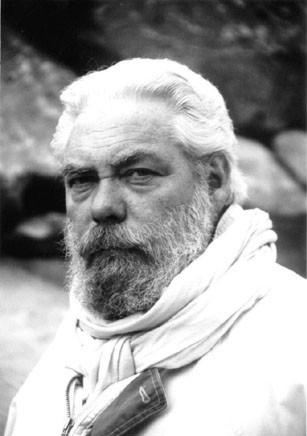 O'Donoghue/Ross began his artistic career when he was six years old, fascinated with drawing birds and landscapes, compulsive about depicting every blade of grass.  His father, John, also artistically inclined, encouraged his son and found work for him by the time he was a teenager.

At the age of nine his family moved from the city to a new house in the developing proto suburbs of Long Island.  At the very edge of the vast Levittown complex, his house was at the end of the trail, three miles from the sea by way of an old straight track called Seaman's Neck Road.  Thus began his early connection with the sea coast and the isolation of being in the hinterlands.

Ever since he has always preferred wilderness places to live in...from the midst of a wooded twenty acres in a 'forest primeval ' on the tricorner palisades which divided the states of Massachusetts, Connecticut, and New York, to the exposure of open ocean surf on the pink granite coast of Maine north of Bar Harbor, and eventually to a mountainside outside Killarney where the parapets of Ross Castle can be seen in the distance.

Graduated with an Associate Arts and Science degree from the State University of New York in 1961, shortly after he joined the USAF as air cadet in the jet fighter pilot program.  After a brief period he 'washed out' due to issues with depth perception.  Offered a commission, he declined and accepted instead appointment as flight commander of a special weapons training unit of Air Force Security forces.

He was sent to Wheelus Air Force Base, Tripoli in Libya, North Africa where the adjacent French Algerian War was the leading world hotspot before the rise of the Viet Nam conflict.  Once there he was assigned the duty of Airbase Artist with temporary duties in sport and security night time posts far off the base.  On a trip home on leave, he stopped in Ireland and climbed to the top of Ross Castle overlooking Loch Lein when it was still in a ruinous state.  Standing there on the parapet, overlooking the smooth lake and the mountains beyond, he felt for the first time that he belonged.

Returning state-side after his tour, he was posted at McConnell Ari Force Base, Wichita, Kansas, where he met his soon-to-be wife, Elizabeth.  He spent part of that time stationed at the underground silos of the nuclear weapons scattered across the flat lands of Kansas.  After leaving the service, O'Donoghue/Ross went back to study art, graduating magna cum laude with an MFA from City University of New York.  During that period, he had a brief career with the publisher Doubleday and Co.  Over those years he moved from Sales, to Publicity Manager of Special Projects, to Managing Editor of the Dolphin Books division.

O'Donoghue/Ross left the publishing house to illustrate several books and teach at the Brooklyn Museum School of Art while beginning to produce limited edition aquatint etchings.  He and his wife worked together, he producing a large number of copper plate aquatint and mezzotint images which she printed in suites that he sold through various print publishers...HMK Fine Arts, John Szoke Graphics, Lublin and several others.  He was associated with several galleries, among them the Gramercy Park Gallery, NY and Vorpal Gallery in Soho and San Francisco.   He was invited to join the teaching staff at CUNY but utimately declined to do so.

He was swept along by the art boom of the 1970's and moved with his wife and young son to a small log cabin called Undermountain House in New York state in 1978.  By 1981, he had moved further north to the coast of Maine, but the art market had begun to cool off.  Being the type who will say 'been there...done that', he decided it was the right time for a new adventure and set sail for Ireland with his wife and family to the territory of his ancestors - and this was his chance to see if there is any truth to those childhood stories.

O'Donoghue/Ross purchased a few acres on a slope of the shoulder of Crohane mountain in 1986, described as Monarch of the Eastern Mangertons, and built a house and studio there.  The majority of people living in the area were O'Donoghues, and they welcomed him as if he was a returned chieftain, coming home.  His children grew up, assisting him with more and more skill as they matured.  He maintained a studio in which the youngsters were his apprentices, much as in the days of the great masters and their workshops, and Eoghan and D'Ana gained skill and expertise with their father as their teacher.  His daughter Siobhán worked more closely with her mother, who was the master printer, business manager and general factotum for the family business.

O'Donoghue/Ross had dabbled in pewter casting in his early years, but became interested in direct carving, beginning with a small pink sandstone boulder he pulled out of the ditch.  The work became more monumental when he was given the opportunity in 1999 to carve massive boulders that were place along the new N22 roadway being constructed outside Killarney on the way to Cork.  In addition, he created a massive ferro-cement horse, Capall Mór, which was placed towering above the roadway, dominating the skyline for travellers passing by.  The project was christened 'The Sculpture Road to Killarney' and Capall Mór became an instant landmark.

In 2003, O'Donoghue/Ross was commissioned to create a monument to St. Brendan the Navigator to be sited at the top of Samphire Island jutting out into the sea at Fenit Harbour in county Kerry.  This piece was executed in bronze, and a small park was created beneath the monument with additional sculptures and stone work provided by Eoghan and D'Ana.

During this time, O'Donoghue/Ross became close friends with Geoffrey Paul The O'Donoghue of the Glens, the recognized chieftain of The Glens sept of O'Donoghues.  He in turn introduced O'Donoghue/Ross to Rod O'Donoghue, the founder of The O'Donoghue Society, where a DNA project was initiated to study the genetic history of the O'Donoghues.  Elizabeth eventually assumed the role of administrator of the DNA project, and the testing that was done confirmed that the family stories of descending from the chiefs of Loch Lein was not just blarney.  The Glens and the Society have acknowledged O'Donoghue/Ross as the direct descendant of those wizard princes, and he has come full circle from fallen chiefs to rapparees and rebels to the grandson of an Irish immigrant fleeing to America  in 1905 with an old French rifle used by the IRB and a price on his head.  The stories back to the last chief of Loch Lein are for another time, but suffice to say that they provides a rousing tale that fascinates young and old.

Though exhibiting internationally while living in America, when he returned home O'Donoghue/Ross gradually began to withdraw from the gallery circuit and has exhibited little over the last ten years.  Retaining what he considers his best work throughout his career, he has amassed a vast body of work, most of which has never been viewed publically.

He has taken commissions on occasion, including his first work in stained glass.  The Fenit Church was remodelled and expanded, and O'Donoghue/Ross was given the opportunity to provide the stained glass windows for the building.  Eoghan had studied and worked in glass already, so he provided the technical expertise to construct the windows, and D'Ana assisted as well.

In 2013, O'Donoghue/Ross also created a set of windows for St. Mary's Cathedral in Killarney.  These are entirely hand painted glass panels, with the theme Dawn and Dusk.  Included is a dedication plaque to his Rapparee ancestors.  Eoghan and D'Ana again assisted throughout and installed them.

Eoghan and D'Ana continue to create their own work as well - Eoghan focusing more on sculpture and three dimensional work, while D'Ana dabbles in a variety of materials, much like her father.  A selection of their work can be seen on the Clan link.

O'Donoghue/Ross cannot be easily codified, and is neither a magic realist, a symbolist, an expressionist nor a surrealist in the strictest sense, but a bit of all of these.  He is adept in all media, from monumental sculpture to etching and engravings, though presently focusing on painting.

O’Donoghue/Ross’ oeuvre is full of symbol and surrealism, his imagery playful, yet profound.  Many of his images contain allusions to Irish and Celtic myths, but he gleans material from all faiths, mythologies and philosophies when compiling his surreal world.

Though somewhat surprising for a septuagenarian, he began to explore the social media of the internet and developed a following, mainly of young artists appreciative of his consummate imagination.

Tighe O'Donoghue/Ross is the head of the family known as the O'Donoghues of Ross and is recognized as the hereditary Chief of Loch Lein, a Gaelic title of great antiquity. It is perhaps this personal situation that has influenced his unique vision of timeless nostalgia, yearning for the past while stuck in the unalterable present. His imagery has been described as Magic Realism which, like its relatives Surrealism and Metaphysical Art, some consider a thing of the past. His version, however, celebrates the genre without mimicking it and is based on anachronisms and traditions which create a mindset conducive to the theatre of dream.

Born in 1942 in Brooklyn of middle class parents, he none the less was led to believe that he was descended from legendary Gaelic Princes.  More than this they were native Irish warrior wizards and alchemists, possessed of a vast library and a stark castle tower called Ross rising above the Great Lake of Killarney.

As he grew up this all became more like pure blarney, yet the seed had been planted since infancy, and his slowly growing sophisticated and sceptical mind was loathe to let it go.  Perhaps because he took it with a very healthy grain of salt, it was a tolerable fantasy not to be taken too seriously...yet a hint of curiosity remained.  What if some of it might be true?